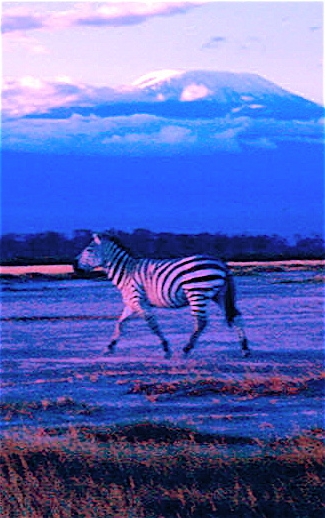 A Lone Zebra Below Kilimanjaro
So far I have written 260 articles for Health Central about all aspects of diabetes. In March this cutting-edge website published nine more of my new diabetes articles:


Dr. Alvin Jones, who runs the "Paradise Radio Network" on stations WCBQ-AM 1340 and WHNC-AM 890, interviewed me on March 24 about my new book, Losing Weight with Your Diabetes Medication. I converted the file to mp3 format so that no matter what computer platform you use, you can listen to the entire 10-minute interview here.

During the past 14 years since a doctor diagnosed my diabetes, I have participated in many support groups. Several of the Internet groups are excellent. I highlight some of my favorites on one of my web pages.

But until now all of the local groups that I participated in disappointed me. If they didn't become purely social, they remained practially superficial. I always felt that most of the people present at these meetings came because they had to -- because their doctor or there spouse told them to come -- not because they wanted to learn about how to control their diabetes.

So I started my own group.

The group grew out of occasional meetings that I had with two friends who are completely committed to controlling their diabetes with the best nutrition and exercise. I got such pleasure from working with them that I decided to invite more people to meet at my apartment every month.

The first of these groups met this Saturday. We started with five people, and nine is our maximum group size. That's the maximum for the technical reason that larger groups don't give people as much time as they need to discusss their individual questions and for the practical reason that I have only nine chairs.

The second limitation is that all of us have to be committed to controling our diabetes. I know first-hand how uncommitted people can drag down the level of the group.

The third limitation is that we are all men. Diabetes is such a personal subject -- including sensitive areas like libido and erectile dysfunction -- that us men are better off discussing it among ourselves. Women can and do form their own groups.

The fourth limitation is geographical. To participate in a local group you need to be local. In this case, you would need to be in or near Boulder, Colorado, where I live and work.

I determined from the start to make this group free. After the first meeting, one of my friends encouraged me to charge for it, saying that he and others must be getting a lot more from it than I do.

It is true that people value what they pay for more than what they get free. But I don't want the money. Maybe some day I can charge for these meetings with all of the money going to a worthy and appropriate cause, if and when I can think of one.

For now, I know that I will be getting as much out of the group as the other participants. Already I see at least two areas where the group is helping me. When I try to describe something, I sometimes find areas where my knowledge is weak, reminding me to brush up on those areas. And when I listen to the issues that interest group members, I get ideas about articles that I need to write.

If you happen to be a near neighbor of mine, have diabetes, are determined to control it, are a man, and would like to participate, please call me at (720) 319-8423 or write me at mendosa@mendosa.com.

If, however, you don't live near me, go ahead and start your own group. Or convince one of your friends to do that. You will all benefit.

I now send out Diabetes Update once a month. Previous issues are online: