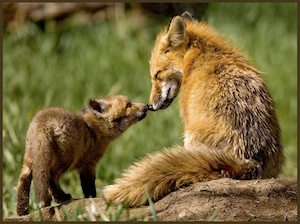 My friend and mentor, Doug Goodin, is a professional photographer here in Boulder, Colorado. He took this wonderful picture of a mother fox and her worried cub in the nearby Rocky Mountains about a year ago. A large scale copy of this picture has the place of honor in my living room, and Doug authorized me to make this small copy available here. His website is douglasgoodinphotography.com

My programing team and I have now completed many improvements to my website.

The biggest improvement in making the website easier to use is a new and more complete menu system. The menu links articles in the main diabetes categories, like food, exercise, medication, testing, etc. The menu is at the top left of every page of my main site as well as on every page of my "Diabetes Developments" blog. We decided not to add the menu system to my "Fitness and Photography for Fun" blog.

But an improved search tool, the other major upgrade to my website, makes it much easier to find what you are looking among my articles. You can find the "Advanced Search" tool on its own web page at www.mendosa.com/search.htm. Using that page lets you search the entire site, the "Diabetes Developments" blog, the "Fitness and Photography for Fun" blog, or my articles at Health Central. In addition, each web page on my site, except for those in the Fitness blog, now has its own search box at the top center.

These changes were long overdue as my website grew so large in the 14 years since it first went online. It now includes about 1,300 of my articles about all aspects of diabetes as well as about 40 important articles contributed by others, including three book-length reports.

By the way, if you are looking for outstanding programmers who are most affordable, please let me know. I will put you in direct touch with them.